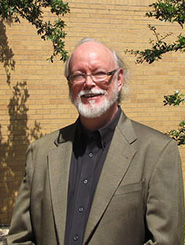 Dr. Jerry McCoy is Regents Professor of Music Emeritus for the University of North Texas, where between 2000 and 2015 he led the UNT choral program to national and international acclaim while serving as Director of Choral Studies and conductor of the A Cappella Choir. From 1984-2000, Dr. McCoy served as Director of Choral Activities and conductor of the Oklahoma State University Chamber Choir and Concert Chorale, establishing a national and international profile for the choral program.  In 2016/17, he served as Visiting Professor of Music at Baylor University where he conducted the A Cappella Choir and taught graduate choral conducting.

2018/2019 markedDr. McCoy'seleventh and final season as Artistic Director/Conductor of the highly regarded Fort Worth Chorale and Chamber Choir (formerly Schola Cantorum of Texas). He was also founding director of Texas Choral Artists (2001-2006) --a professional choir based in Dallas, and TheStillwater (OK) Chamber Singers (1985-2000), now in its thirty-fourth season. His publishing history includes a choral music series with Santa Barbara Music Publishers and current service as Chief Consultant for Digital Publishing Inc. (Dallas).

From 2007 to 2015 he served as a member of the National Executive Committee for the 20,000-member American Choral Directors Association (ACDA), serving as the organization’s national president from 2009 to 2011.

Under his leadership, UNT graduate students were named to faculty positions in choral music at forty-one universities in the U.S., Mexico, and South Korea. They lead nineteen professional or civic choirs across the U.S. and South Korea and serve major congregations in Georgia, Mississippi, Oklahoma, Texas, Washington, and across South Korea. Many of his graduates also hold national, regional, and state leadership positions within the ACDA.

Dr. McCoy was honored to serve as one of the ACDA Legacy Conductors for the 2019 national conference. In addition, in 2018 he was nominated for a $10,000 grant as part of the national TIAA Difference Makers Program.  And, in early 2019, portions of his A Cappella Choir's 2010 TMEA performance were used as a sound track for a new short film titled Combination Fried Rice.The award winning film was part of Tropfest 26, Australia’s largest and most popular short film festival. Additional honors include: the Texas Choral Directors Association’s prestigious Choirmaster Award, the OSU Wise-Diggs-Berry Award for Faculty Teaching in the Arts, the Oklahoma Choral Directors Association Director of Distinction Award, the University of Texas at Arlington Outstanding Alumnus Award, and numerous research and study grants.

He has been a guest conductor/clinician/adjudicator in forty U.S. states. He has served as the headliner/conductor for the Korean Federation for Choral Music (Gyeongju), as Jury Panel Chair for the Busan (South Korea) International Choral Festival, and as a member of three jury panels for the World Choir Games (Shaoxing, China; Cincinnati, Ohio; and Graz, Austria), and Alberta Choral Fest South (Calgary, Canada). He also served as guest clinician/lecturer for Music I Vasternorrland (Swedish Choral Directors Association, Sundsvall, Sweden).  He currently serves on the international honorary board of INTERKULTUR(World Choir Games). Guest engagements for 2018-19 include appearances in California, Florida, Kansas, Missouri, Oregon, and Texas.

His commercial recordings include releases by Klavier Records and GIA Music Publications, as well as the premiere recording of Jake Heggie’s Ahab Symphony, released on CD Baby.

Jerry is a graduate of the University of Texas at Austin and UT- Arlington. He is married to singer, voice professor, and choral music artist Julie McCoy.