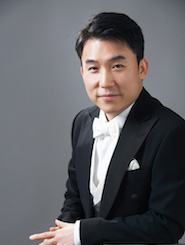 Since graduating, Junyoung has conducted various types of choirs in Korea. In particular, he worked as the director of the Youngdo-gu Women's Choir and the Youngdo Youth Choir where he performed approximately two hundred concerts for nine years. He led these ensembles to win more than twenty major choir competitions, both national and international between 2008-2016.

A dedicated church musician, Junyoung also led CORAMDEO Mission Choir and CTS Children's Choir for Jesus Christ. These choirs were invited to the Korean Church Music Association's Choral Seminar as a model choir in the field of Choral Missions for Christ. Additionally, he has served as an instructor at Busan Metropolitan City Office of Education where he taught choral music from 2013-2014. Junyoung currently resides in Denton with his wife, Hyunju, and their two children, Minseo and Yeseo.