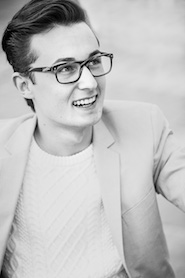 A Kansas native, Samuel Sweet currently attends the University of North Texas in pursuit of a Master of Music in Choral Conducting degree with a related field in Composition. Sweet holds a degree in Vocal Music Education from UNT and General Teaching Certification in Early Childhood through High School in Texas. In his undergraduate he had the privilege of receiving pedagogical tutelage from Dr. Jessica Nápoles, Dr. Allen Hightower, Dr. Jamey Kelley, Dr. Alan McClung and Professor William Joyner. He currently is the acting Assistant to the Director of Choral Activities at UNT for the Fall of 2018.

Currently residing in Denton, TX, Samuel has traveled the country for conducting and professional performance engagements. Samuel was a finalist in the 2018 SWACDA Undergraduate Conducting Competition in Oklahoma City, Oklahoma. Sweet also served as a student clinician for the TCDA reading sessions in 2017. Prior to that he worked during the summers at UNT as a camp counselor, engaging and assisting students across Texas with the All-State Repertoire. Frequently, Samuel is seen in many professional Dallas-based choruses including Dallas Bach Society and Dallas Choral Festival. He has also held many church positions while in Texas. Under the direction of Jonathan Ryan, Samuel currently is a Tenor Section Leader at Saint Michael and All Angels (one of the largest Episcopal congregations in Texas) and serves in their professional ensemble, the Compline Choir.

An avid composer, Samuel has been published under reputable houses such as Classical Vocal Reprints and E.C. Schirmer. Centered in mostly vocal literature, Samuel has had commissions and premieres of his works across the country, including, but not limited to: Eastman School of Music, Songfest! - Colburn Conservatory (L.A.), University of Cincinnati, Intercollegiate National Men’s Chorus Seminar – Washington D.C., and by many artists and faculty members at the University of North Texas. His professional affiliations include ACDA, TMEA, TCDA, and KMEA.