The University of North Texas Chorale is composed of Soprano and Alto singers of all majors. Chorale will perform at the annual UNT ChoralFest! As well as presenting both fall and spring concerts. Students are encouraged, but not required, to complete a choral audition to participate in the ensemble. 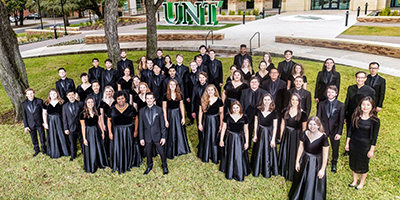 The University of North Texas A Cappella Choir is led by Dr. Allen Hightower, director of choral studies, and is the premier ensemble in the UNT choral program comprised of nine choirs. The A Cappella Choir has had a distinguished history of conductors that include Wilfred Bain, Frank McKinley, Hal Gibbons, Mel Ivey, and Jerry McCoy. In 1966 the choir participated in a three-month tour of Europe under the sponsorship of the US Department of State. The A Cappella Choir frequently performs at regional, national, and international conferences. Most recent engagements include TMEA (2020); National ACDA in 2013 (Dallas), 2005 (Los Angeles), and 1999 (Chicago); NCCO in 2008 (Cincinnati); and International Choral Festivals in 2012 (Daejeon, South Korea) and in 2009 (Taipei). 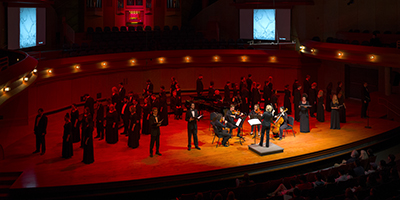 While comprised primarily of musicians from the College of Music, the University Singers welcomes artists of every academic discipline with a love and capacity for choral singing. Led by Dr. Kristina Caswell MacMullen, the ensemble explores a wide variety of repertoire within the context of concept-driven artistry. Many performances involve the practice of Choregie, a fusion of extra-musical meaning and physical movement. In addition to a robust performance schedule throughout the year, the University Singers combine with the UNT Grand Chorus to present extended works with orchestra every spring. Recent performances include Verdi's Requiem and Mendelssohn’s Elijah. Auditions are held during the week prior to the first week of classes in August. 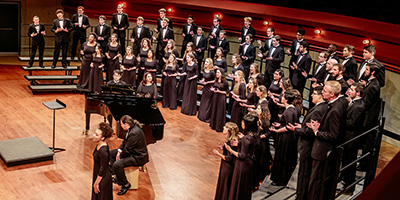 The Concert Choir is an auditioned mixed choir open to students of all majors in the university. Auditions are held in August, the week before classes begin. Concert Choir collaborates frequently with area high schools, consistent with its mission to share our love of music with others and to uplift others through choral singing. The Concert Choir is committed to engaging meaningfully in service to the community. In recent years, we have participated in the Out of the Darkness suicide awareness community walk and in the Meetup Cleanup initiative for combating littering in Denton county. Concert Choir combines annually with the A cappella Choir and University Singers to form the UNT Grand Chorus, which performs extended works with orchestra. Recent performances include Verdi's Requiem and Mendelssohn’s Elijah. 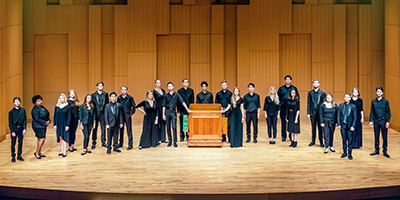 Vox Aquilae, conducted by Dr. Allen Hightower, is a chamber choir dedicated to period performance, usually in collaboration with UNT's Baroque Orchestra or other musicians from UNT's extensive early music program. The choir, formerly known as the Collegium Singers, consists of members of the other student choirs and graduate students in voice or early music. Vox Aquilae has regularly performed the Boston Early Music Festival, the premiere early music festival in the world. In June 2012, fourteen members of Vox Aquilae were invited to perform the Victoria Requiem at the Berkeley Early Music Festival--view that live performance here. The choir also performed at the National Collegiate Choral Organization convention in Portland, OR in November 2015.

Their performance from December of 2011 of the Vivaldi Gloria on YouTube has had more than 2,900,000 views. 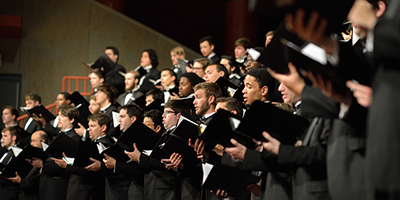 The University of North Texas Grand Chorus is comprised of over 160 singers drawn from the A Cappella Choir, University Singers, Concert Choir, and other interested individuals. The Grand Chorus has a distinguished history of performing under the leadership of many of the world's most highly respected orchestral conductors. The late Georg Solti called the UNT Grand Chorus one of America's best choirs. The Grand Chorus sings annually with the UNT Symphony Orchestra, UNT Chamber Orchestra, UNT Wind Symphony and/or regional symphonies. Recent repertoire includes Verdi's Requiem, Menselssohn's Elijah, Puccini's Turandot, Rachmaninoff's All Night Vigil, Beethoven's Symphony No. 9 and Mass in C Major, Mahler's Symphony No. 2, Stravinsky's Symphony of Psalms, Mozart's Coronation Mass and Requiem, Brahms' Ein Deutsches Requiem, Britten's War Requiem, Howells' The Hymn of Jesus, and Bernstein's Chichester Psalms. In the spring of 2013, the Grand Chorus, Symphony Orchestra and tenor Richard Croft, gave the premier of Jake Heggie's Ahab Symphony, which is avaiable on iTunes, CDBaby, and Amazon. In April 2003, the Grand Chorus performed and made a commercial recording of Orff's Carmina Burana in a new complete edition for wind symphony, choir, and soloists. The compact disc is available from Klavier Records and the DVD is available from the UNT College of Music. 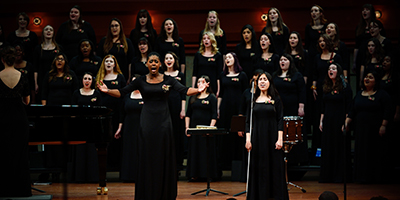 Kalandra, meaning “Songbird" in Greek, is an ensemble comprised of sopranos and altos, selected each fall by audition. Members of the ensemble come from diverse backgrounds, including both musicians from the College of Music and academic disciplines campus-wide. Kalandra performs both historical and contemporary repertoire, celebrating the complexity and vitality of the treble voice. Conducted by Dr. Kristina Caswell MacMullen, the ensemble strives to connect and empower artists through meaningful music-making. Kalandra was formerly known as the UNT Women's Chorus. 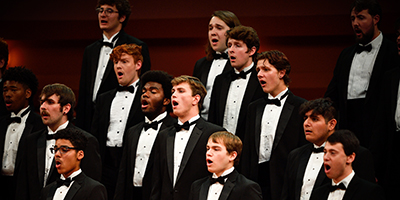 The University of North Texas Chorale is composed of Tenor and Bass singers of all majors. Chorale will perform at the annual UNT ChoralFest! As well as presenting both fall and spring concerts. Students are encouraged, but not required, to complete a choral audition to participate in the ensemble.

The UpFront Choir is comprised of all choral music education majors in the UNT program. It is a peer-led ensemble that offers junior and senior choral music education students the opportunity to conduct a collegiate choir and gain experience teaching choral music before their student teaching semester. This ensemble, unique to UNT and a national model, is student led, and supervised by Dr. Jessica Nápoles, Dr. Jamey Kelley, and Dr. Kristina Caswell MacMullen. UpFront regularly performs in service to the Denton community. Committed to service in the College of Music and the profession, members of UpFront engage in freshman mentoring initiatives, collaborations with local public schools offering voice lessons to students, professional development trips to TMEA, and tutoring sessions in music theory and aural skills to music majors. Our aim is to be sure that all choral music education majors have a support system in each other and with the faculty, seeking consistently to uphold high standards for teaching and building community.

The Conductors' Chorus is an auditioned laboratory ensemble that provides guided conducting opportunities for graduate choral conductors at the University of North Texas.